View this update on Kickstarter 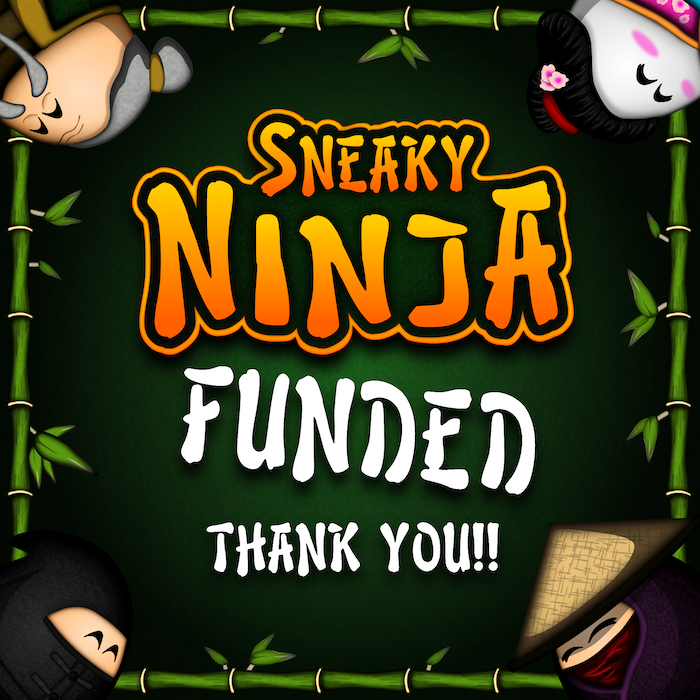 What an amazing ride! An entire month of nailbiting is finally over, Sneaky Ninja has been FUNDED in its final 24 hours! We really, really, really could not have done this without the support of our fans, and we just can’t explain how grateful we are! Thanks to all of your help, Sneaky Ninja will end up being a significantly better game than we would’ve been able to make otherwise with all of the cool software we can now afford!

And of course, now we can officially promise a Wii U release of the game! This has been a huge priority for us personally as big Nintendo fans, and we’re glad that other Nintendo fans have shared our excitement for the idea and come together to make it happen! The support from the Nintendo community in particular has been awesome, so thanks so much to all of you and we’re very happy to be able to give you the game after all!

We still have time left over to maybe reach a stretch goal, so we’re not letting up yet! But we’re still making time for some fun, so we’ve been chilling with our fans in a 24 hour livestreamcounting down to the end of the Kickstarter! We’ve been streaming games, answering questions, and challenging our fans to online matches in Smash 4! Come by our Twitch channel and have some fun, we’re going all the way til 12pm EST March 12th!

That’s where we’ll be until the Kickstarter officially comes to a close. It’s been absolutely awesome, and thank you so, so much to everyone who was a part of this adventure! Now we need to take a day or seven to sleep, but after that, it’s right back to work. We can’t wait to keep in touch with all of you and get you involved in the rest of Sneaky Ninja’s development!